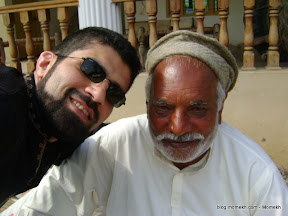 Feeling big about travelling hundreds of mile in my not-so-comfortable car to just ‘meet’ with someone who has reached the epitome of success as I’d define it, I was already happy that I was in Hafizabad. The person I was to meet has been breeding Unicorns it seems.

I have a direct interest in the business of agriculture, and recently been involved in setting up dairy farms. I have visited a few, read about the different techniques, applied them to gauge results and talked to all sorts of people in the business of livestock. Here’s what I have gathered so far, related to the selection of cows vs buffalo:

That’s pretty much all that I have heard and read about. From SMEDA to PITB to every ‘serious’ businessperson in between, buffalo are the ones that had got to go. You can already see the effect of preferring the imported cows versus our own indigenous buffalo in brands like Prima, that proudly claim to give out 100 percent pure cow milk.

The reasons quoted for ditching the Buffalo completely are not many, but are simple enough to understand i.e. the buffalo, on average gives 6 to 8 liters of milk over the 10 month lactation period. The imported cows give anywhere between 20 to 30 liters. The difference in milk yields is more than significant to convince any would-be entrepreneur to write off buffalo completely.

But I have been in the milk business for the last three years (via my other project, Kemaak) or so and I know that selling cow milk is harder. People are more attuned to the high-fat, relatively sweetened taste of buffalo milk. I had a direct interest in keeping buffalo in my dairy farm, instead of cows. That is where Mr. Hanif comes in with his unicorns.

He breeds buffalo that give, on average, 15 to 18 liters. When I heard it, I was sure that this is the Unicorn i.e. a myth borne out of the sheer desire of people to have buffalo that can give high yields of milk. I found the unicorns to be not-so-mythical after all, when I met Mr. Hanif in his 100 Acre orchard. Nestled in this orchard is his small farm of animals, both cows and buffalo.

And you know what was the first thing he said when I asked him about his method of operation? “I don’t do it for the money, I do it because I love these animals.”

His herd size is hardly 20 animals, but the milk yield is more than what other people I know produce with 80 or 100 animals. He proudly told me that in the last 4 decades or so, his love for buffalo and his desire for excellence (his own words) has given him the finances to buy 100 acres of land, put his children through 16 years of education and have given him respect that only winning 5 Presidential awards in Cattle Breeding can bring. And after saying this, as an after though, he adds, “I did not do it for the money though”

Hey salaams, Mohammad here. I publish this award winning blog Just Add Venture, and run Momekh.com, the coaching and consulting business helping people and brands grow. I write about personal and team productivity, living life to the fullest and creative self employment. My dream and challenge is to live completely under the graceful umbrella of the Quran & Sunnah, while exploring all that this life has to offer, in hopes that when I meet my Maker - for indeed we all will - I can say, "I used everything You gave me". #Bismilla