I am a wimp most of the times

Are you a wimp? Probably.

Do you want to be braver, bolder? Probably.

I am wimp most of the times. I make too many excuses, I rationalize too many things for long enough for them to lose all appeal and I think I am right most of the time. I also make – at any given time – an infinite number of plans and dream up traveling to the farthest point from ‘here’. I keep making these plans, fleshing them out on paper, breaking them down into ‘smaller’ goals, till I find a better, bigger plan, rationalize it to being better than the one before, and get back to being a wimp all over again. I have a fail-safe mechanism of labeling these plans as ‘my dreams’ and I romanticize it enough to ensure that these dreams do not enter the realm of actual, doable opportunities.

I blame it on complacency.

But that is the negative side of the same coin. The other side of negativity is uplifting so let’s consider that.

Sometimes I am very brave, truth be told. I rationalize what needs to be ‘explained’ to myself, and then find the first thing that can be done to be a bit closer to my ‘dream’. The dream in itself is not important, at least not when I am ‘brave’ and ‘bold’; the real excitement is the journey, the adventure of fulfulling that dream. 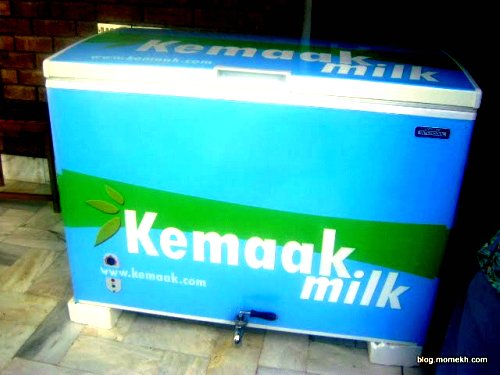 For example, I once wondered what would happen if I tried to exploit the market gap between high-end UHT-packed milk carton and the home delivery of raw milk done by the average Pakistani milkman. A few days later, I was in the inner part of inner-Lahore, haggling over the price of a custom-built rickshaw to deliver the milk to the odd 100 houses that I have already surveyed the day before. The survey of going to a 100 houses took one day to distribute and the next day to collect the answers. I already had the source, the market and all I needed was the ‘logistics’. Three days and less than 100,000 rupees later, my rickshaw nicknamed chinky driven by my trusty first employee left my house to deliver a total of 1.5 liter of milk three houses down. Four years later, the same one act of bravery survives on its own, still delivering fresh milk in Lahore. Within one month, the milk sale increased significantly and the business was actually profitable within the second month, and has been since then. Alhumdulillah

One act. One finished project. Less than 7 days. Four years later, that dream that converted into an opportunity still reeks of a job well done.

What is it that you want out of life? That’s too tough a question, so let me ask you this, “what do you dream about?” or “what do you want to do/be/have in the next day/month/year?”

Do you know what is stopping you?

Hey salaams, Mohammad here. I publish this award winning blog Just Add Venture, and run Momekh.com, the coaching and consulting business helping people and brands grow. I write about personal and team productivity, living life to the fullest and creative self employment. My dream and challenge is to live completely under the graceful umbrella of the Quran & Sunnah, while exploring all that this life has to offer, in hopes that when I meet my Maker - for indeed we all will - I can say, "I used everything You gave me". #Bismilla