Want to be a better person?

The first thing we do is try to change ourselves. Change our habits. We start with the man in the mirror. Make promises. Resolutions. Commitments.

Things start moving. A few days into it perhaps, you feel good about it.

Then a small hiccup in your progress towards a better you. Then an annoying hurdle. Then a giant brick wall. Your wagon of dreams crash and crumble against it.

You are back to that crowded little place called square one.

Let’s back up a little. In our efforts of self improvement, we’ve been focusing too much on the improvement, and forgetting the self.

You are Spongebob Squarepants

You are a copy of everyone around you.

Or – to justify my use of Mr. Squarepants – like a sponge, you are heavily dependent on your surroundings (hopefully, you’re not as yellow and don’t have as many holes).

A lot of people refuse to believe that their surroundings and their company has such a profound influence on them. When I use the word “influence”, I simply mean that the people we interact with will one way or the other, rub off on us. The more we interact with them, the more “like them” we tend to become. Sort of.

Any psychologist will tell you how our behavior is heavily influenced by the people around us. There is ample research that shows how we end up doing what “everyone else” is doing, regardless that thing is socially acceptable or not.

Still not convinced? As an example, consider this experiment. To minimize theft of wood by visitors to a national park (in America), scientists made two signs. One sign stated the fact that “Many past visitors have removed the petrified wood from the park, changing the natural state of the Petrified forest“. This was true, but provided negative social proof. The other sign simply encouraged the visitors to not steal, without quoting any statistic. And as a control, they also counted the marked wood while there was no sign.

More pieces of wood were taken when the sign told visitors that many people were stealing.

The moment we are stuck on a decision, we tend to follow the crowd. Social Proof encourages us to do what otherwise we wouldn’t. That is why it is not recommended to make “public confessions” of sins or to openly debate the vices of any given society. Although most people say that to “show us the true picture”, the net result is that we are encouraged to do what everyone else is doing regardless it is socially acceptable or not.

We are influenced by the people around us and the people we associate with are our influencers.

So to change yourself, maybe we need to change our influencers.

This is not easy. A big red button doesn’t exist that once pressed, will change your surroundings.

But there is a way.

Your Surroundings Can Be Changed

It’s not easy, but thankfully, it is simple.

As we saw, we can not help but be influenced. But we can choose the people who surround us.

You find your own world in the world of others.

Books. Movies. Lectures. Travel. These things, if chosen appropriately, can give you a different set of surroundings.

I still remember how a pirated copy of a book by Tony Robbins influenced me, twelve years ago. I sure as heck remember reading and re-reading Richard Branson’s take on business, and thinking, “if this guy says it’s OK to think the way I think, I am going to give it a shot”. For all intents and purposes, my life changed.

Because my thinking changed. Because my influencers changed. In that order.

Physically, for the sake of geography, you become very different than everyone around you. But in essence, your surroundings changed first (you become a better rat-killer).

The biggest takeaway is that I can choose my own surroundings, my own community.

Sure, you can waste a million hours on Facebook, but if you use these tools to associate with the right community, you can swiftly change yourself for the better.

The internet has a higher level of influence, because the medium is richer and allows for two-way communications. The communities are more “life-like” than those provided by, say, books.

With blogs, this “influence” becomes easier to access and pick.

I can read the stuff coming from people like Julien Smith, Chris Guillebeau, Chris Brogan and Pat Flynn. I can let that influence me. I can reach out (via Twitter for example) and have meaningful, two-way conversations with them (like I’ve had with all of the above mentioned highly-cool individuals).

But be warned that the internet can be the black hole that can suck all and any time you may have.

What you consume – may it be your diet, or information – ends up as you. So be selective of both. (Click here to Retweet this if you agree).

That is part of the reason I have not watched television for the longest time. That’s why it is recommended you don’t check your email the first thing in the morning; you want someone else’s agenda dictate yours?.

Key takeaway: To change ourselves, we can become part of a community that we find is more encouraging to the behavior we want to inculcate.

The Power of Communities

The “Self” comes to its full potential in a community. Without getting philosophical about it, it is safe to say that although I am a part of the community because I have let it influence me, I too have an influence on other members of the community.

Within this context, one way to continually improve myself is by serving the community. 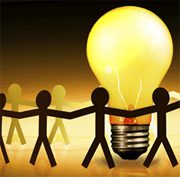 It is my personal experiences that convinced me, almost a year ago, to start building a community here at LifeETC. I get emails almost everyday where I am thanked for inspiring them to move in the direction where they wanted to move. Towards their own definition of freedom. Their own adventure. This is humbling and a very powerful motivator.

Sure, the community of LifeETC is not for everyone (it’s for people who want to be self employed to live a more wholesome/adventurous life) and I consider myself blessed indeed to be able to serve the community.

It is heartening to see people from exceptionally varied backgrounds come together under a single idea. The LifeETC Community has dairy farmers, bloggers, world travelers, shop owners, restaurant owners, photographers, artists, designers, chefs and bankers and engineers. And then some. Some students, some married. Some young, some old. All awesome! 🙂

Next Actionable Item: Identify one thing that you want to inculcate. Then identify the influence or the community that makes it easier for you to do that one thing. Finally, become a part of that community by finding ways of serving it. Do not start by changing the “old” you, but incorporate a solid attempt at changing your surroundings that encourage the “new” you.

Question: Did the above information help? Do you think changing your surroundings is easier with the Internet? How are your experiments with self improvement coming about? Share you thoughts in the comments section. Thanks in advance.

Want to meet up in Islamabad?

I will be in Islamabad for the weekend (Friday 13 July till Sunday 15 July 2012). A few LifeETC Community members have insisted that we meet. Sorry for such a short timeline, but the this is a small ‘impromptu’ meetup and it’d be great if you can come over. So if you are (or can be) in Islamabad on Saturday, and want to meet up, click here for the exact location & time.

My post on using Twitter to grow your blog community will be published on the 27th of July on ProBlogger, God willing. I have received email confirmation of this. I hope you guys will enjoy it. This is a milestone for me because I’ve been thinking of “guest posting” for the longest time. Finally got down to it. Hope you will like it, comment on it, share it etc? 😉

Some back story: Selling to Friends I just came back from yet another “cup of coffee” with a friend — which is what it sounds…

Last year I had an interesting experience. I gave lectures and was invited to speak at different universities. I was talking to students on my…