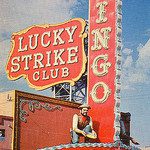 “Luck is when opportunity meets preparation.”

This is the 60s and computers are still these big, room-sized machines. A young teenager finds them fascinating. He and his friend try to borrow time on mainframes. He is from a well-off family and is ecstatic that his private school invest in a computer terminal that he could use. The young kid is pretty much addicted to them. He would also sneak away at 2 AM in the morning to use the mainframe near his house.

Later, when the computer industry starts taking off, he already is prepared. More prepared than anyone else. He starts his own software company, writing code himself along with his friend. This young boy is Bill Gates, the founder of Microsoft, who goes on to become a billionaire 30 times over.

He didn’t pursue his interests because he saw a billion dollar industry down the road. He did it because he just enjoyed computers. His preparation met one of the biggest opportunities (in the form of home computing). That was luck. And Bill Gates would be the first person to tell you how lucky he had been.

George De Mestral was born almost a 100 years ago, an engineer by profession. He grew up in a small village in Switzerland and had an inventive mind (demonstrated by the fact that he patented a model airplane by the age of 12).

His greatest invention came about when he was out walking his dog. He noticed small burrs (a kind of plant seeds) sticking to his clothes and his dog’s fur. Curious, Mestral placed these burrs under a microscope, and this gave him an idea.

At first his idea was ridiculed. He kept at it. He was able to patent his invention and after tweaks and testing, started mass production. His invention was a raging success, and even after a century, his invention is still relevant and a household item all over the world. George De Mestral invented Velcro. Velcro (or hook-and-loop fasteners) is now found on children shoes, sportswear, bags and countless other applications.

An engineer invented his most profitable invention because he decided to look at the most mundane of experiences in a different light. He was out walking his dog. A lot of us do that. He had seeds sticking to his pants; nothing new. And then he got curious. And even that’s nothing new.

The stories of Gates and Mestral do not end with the fact that they were prepared for their opportunities. That’s where the stories actually start. Yes, they were creative and curious but there is no need to celebrate curiosity just yet. We all end up noticing things sometimes, but we do not pursue them like our man George De Mestral did. Or how Gates did.

Their pursuit has a direct link with their background. They saw an opportunity and were able to follow through because they were prepared.

Reading through their stories, the most remarkable observation is that the opportunity came later. They were doing what they would have done anyways. But that’s not all. These guys – and so many other successful people – actually followed through. They capitalised on their own opportunities.

I keep wondering where would I have given up? Where would I have told myself, “this is just too silly,” or too complicated, too taxing on my time or too this or too that? Remember, there was no promise of millions and billions. Had I even bothered?

Steve Jobs said that business is not for rational people. Because rational people would give up, rightly seeing the task at hand to be too hard. You really need to love what you do to keep on going. It takes more than playful curiosity to take your ideas and make them profitable. “Follow Through” is hard. But there will be no opportunity till you are prepared, till you pay attention to your interests.

You are uniquely positioned. Read that line one more time. You are uniquely positioned. No one else is you. No one else has the same background as you. Therefore, no one else can have the same opportunities as you. We chase opportunities, hoping to cash in. We should be chasing our interests. Nurture them through curiosity and creativity. Till they grow to become our passion. And help us do the best work of our lives.

I wish you all the best in your conquests and queries.

Do you know how much a SIM costs? You know, SIMS, that small, usually-rectangular piece of plastic that you put in your phone – do…